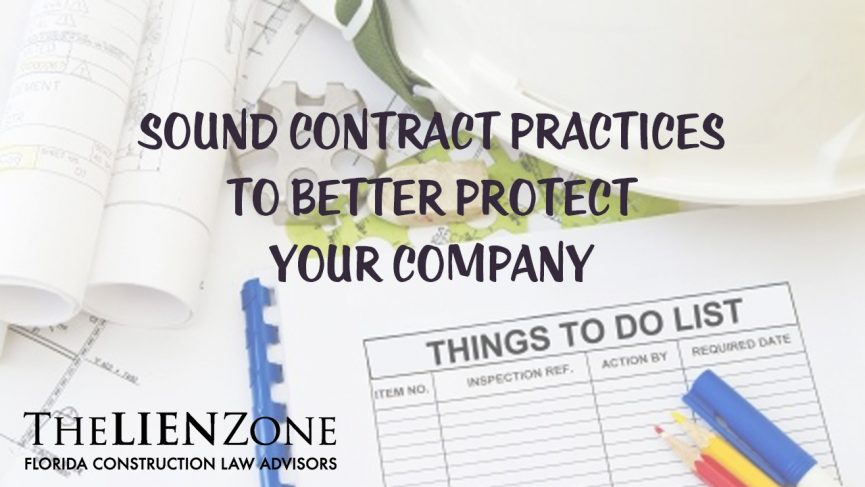 You might be surprised to learn how many business people with a dispute don’t have any written agreement to back up their claim. Sound contract practices protect your company. It’s well worth sticking to these principles any time you agree to a job.

Write it down. Any contract you have should be in writing. Thorough is better than brief, but something is far better than nothing. An agreement can be handwritten or electronic. It could be an email exchange that shows agreement to outlined terms and conditions. A recent legal ruling found a text message created a valid agreement between two parties. A contract doesn’t have to be notarized or be an original copy to be valid. The more complete the better, but just make sure you have your agreement in writing.

Be cautious about “standard” contracts. If someone tells you, “This is what we use for all our jobs,” that doesn’t mean it’s fair. Do not sign without reviewing and amending if necessary. Some favor contracts produced by trade organizations such as the American Institute of Architects. Those are relatively fair to all the parties involved, but could still be made better. Don’t sign blindly.

Clearly define the scope of work. Whether it’s materials, materials and labor, or just labor, be very clear in defining your work. When someone hires you, he wants a broad definition of the work that you are going to perform. He wants to have all the opportunities that may exist in the contract to say, “This is within the scope of your work,” even if it’s somewhat vague.  In contracts prepared by AIA or others, there may be a statement making you responsible for all work that is shown in the plans and specifications, as well as all work that is “reasonably inferable.” Under those terms, if a “reasonable person” believes that something should be part of your work, a judge could determine that to be the case. This can expand the scope of your work beyond what you intend.

When sophisticated owners define scope of work, sometimes they include all the pages of the entire plan and specifications – plumbing, architectural, structural, mechanical, etc. Be wary. If you are an electrician, you want just the plan’s electrical pages defining your scope. But they may want to hold you responsible for all electrical issues in the entire plan. If something is left off the electrical plan, but it is included in the mechanical plan as an electrical item, unless you have limited your scope you could likely be deemed responsible and have to include it for the same price.

List all exclusions. There are things you don’t do in the scope of your work. Have a list of exclusions prepared and be able to itemize what is not included in your price or scope. Include that list of exclusions and limitations as an exhibit in your contract.

Most general contractors with their own contract specify that you can’t do any work without getting a signed and approved change order in advance. However, in such a contract it also likely states that if you are asked to do further work, you agree to keep separate, detailed records of that work and submit the bill. It will be determined later whether it was extra work and whether there was an impact on the schedule and cost, based on your records.

Therefore, if you don’t segregate your own records for the change order work and process, it will be difficult to submit pricing. The contract should state that if you are asked to make a change, the contractor or owner need to verify that change. Generate and submit a change order before you do the work. If it’s rejected, ask for a change directive from the contractor. Either way, you need a paper trail associated with the change.

Verify the schedule. Closely review any schedule in the contract to make sure it’s achievable. Does the contract include a penalty for failing to perform the work in a timely manner? A provision for “liquidated damages” means a per-day penalty for not performing your scope of work on time. Consider adding some sort of buffer to your agreement, a 30-day window before those damages would kick in. If the contract doesn’t call for liquidated damages, you might still be liable for actual damages. That could mean any employees hired and kept on standby to cover your incomplete work, or profits that were lost because the project wasn’t completed on time.

Understand payment terms. How will you be paid and when? You need to clarify these points in advance so you aren’t surprised later.  Are you to be paid within 30 days of your payment application; are you agreeing to a pay-when-paid or pay-if-paid clauses – they’re not the same and both are problematic.  Is there a retainage and when will that be released?

Refine the dispute resolution procedures. Disputes can happen during a job, not just over its end result. Four steps should be included your contract. First, those associated with the dispute should have an in-person meeting to attempt to resolve it. If that initial meeting doesn’t work, the second step is mediation. Both parties would meet, splitting the cost of a neutral, mutually agreed-upon third party mediator who will try to mediate, or facilitate, an agreement.

The third and fourth possibilities are mutually exclusive. You can take a case to a judge or jury to be decided, which can take anywhere from eight to 24 months and be expensive, or you can choose arbitration. Arbitration means the disputing parties hire one to three arbitrators (perhaps a former judge, contractor, engineer, and/or lawyer) who get paid as professionals to decide the matter. Arbitration may be faster than a trial, but there are additional costs associated with this method of resolution, and an arbitration decision is not generally appealable.

Make sure the winner gets legal fees. There are two ways in most states to recover legal fees. First, when someone is sued for violating a statute, typically the winner is awarded their legal fees. The lien and payment bond statutes are among those providing for this. Secondly, if you have a written contract, that contract can include the necessary language to ensure that the prevailing party is entitled to recover legal fees. Because litigation is so expensive, make certain your contract includes this provision, should you need to go down this road.

Contracts are no place to cut corners. It doesn’t have to be complicated, but your contract must be in writing, thoughtful and thorough to give your work and your company the proper protection.