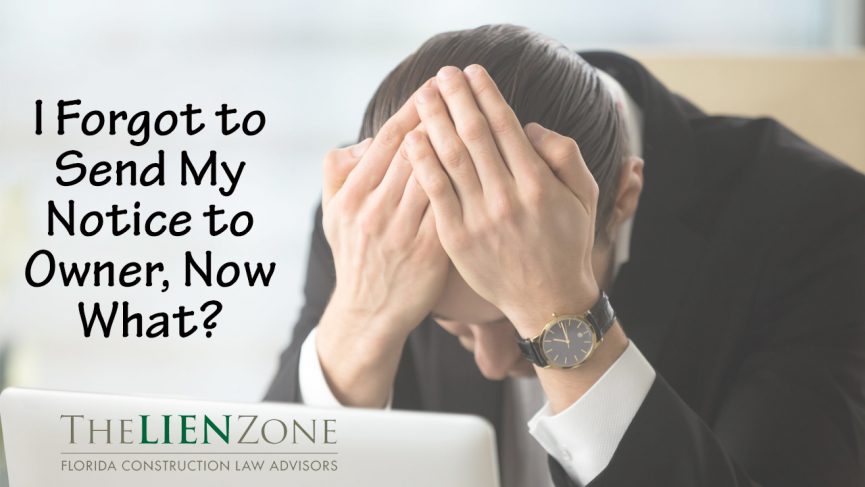 What happens when you forget to send out that Notice to Owner? The short answer is all is not lost. There are still things you can do to get paid. Before we discuss that in detail, let’s go through what the basic notice to owner and lien rules are so that everyone is on the same page.

In order to have a lien right in most situations, you need to send a notice to owner no later than forty-five calendar days from your first work or delivery of materials onto the site. Forty-five days is the outside date within which the owner or any other parties that are supposed to receive the notice actually receive that notice. Therefore, you shouldn’t wait till the forty-fourth day or the forty-fifth day to send it because it’ll be too late. We advise our clients to have a process in place in their office to ensure the notice to owner is promptly sent.

Also, you need to file an action in the courts no later than one year from when you record your lien or one year from your last work if you’re suing a bonding company. Note that there’s a little difference of up to 90 days between suing on lien and suing on a bond, but the outside limit is one year after which your lien and bond claim is automatically extinguished.

Some clients believe that they can re-record the lien. For example, they record the lien on January 2nd, 2016. So, when January 2nd, 2017 comes along, they think they will be able to keep their lien alive by recording another copy. That’s not a thing to do. That would actually constitute slander of title because the second lien is no good. You can keep that lien alive by doing one thing and only one thing, and that is to file a lawsuit to foreclose on your lien no later than the one year.

What happens if you miss the deadline or more importantly you think you missed the deadline?

There are some instances where no notice to owner is actually needed. Here are the common exceptions.

On bonded projects, the 45 days to serve the notice to owner (or technically notice to contractor) does not start to run until you have actual or constructive knowledge of the bond: We had a client who was a sub-subcontractor on a public project in Homestead. He did not send his first notice within 45 days of his first work on the job. The mistake came from his office. He was switching administrative staff, and they missed that deadline. They just totally forgot to send it. The job went on for a little less than a year. When he finished the job, he was owed about $100,000, and came to us. He said I didn’t send my first notice to the subcontractor (remember our client is the sub-subcontractor) and the subcontractor had filed for bankruptcy. We did some digging, and we realized that the job was a public job and it was bonded, but the contractor failed to record a copy of the bond. So, that means that we as the sub-subcontractor and everyone else on the job did not have actual or constructive notice of the bond because the contractor did not record a copy like he was obligated to do. That meant our 45 days had not even started to run (remember we are now almost about a year out from when we started the work). What did we do? We served a notice to contractor once we figured out that the job was bonded and we were able to obtain a copy of the bond. The next day we served a notice of non-payment on the bond and then the day after, we filed the lawsuit on the bond to get paid. The end result was that our client got all their money plus legal fees plus interest. These were the same people that were ready to give up because they thought they missed that first notice. Lucky for them, they fell into an exception in the lien law that gave them rights that they didn’t even know they had.

Pro tip: No notice of nonpayment is needed when you have a direct contract with the bonded contractor on a public project (but still send one).

Is there another bond that you can go after?

The question now is how do you get your hands on that loud? Because that secondary bond from the sub is not a statutory bond, it doesn’t get recorded in the public records. The best place to obtain it in our experience is from the contractor. If you ask the subcontractors for the bond, they may ignore your request because they don’t want you to be making claims on their bond. But the contractor who required the sub to get a bond and has a copy of it, is looking to protect not only himself but his bond. So he would usually be more than happy to give you a copy of the subcontractor’s bond instead of his bond. If you send a certain formal written demand as outlined in the statute, and it contains the right magic language both the contractor and the subcontractor are technically obligated to give you a copy of their payment bonds.

Keep in mind that other bonds may exist. The importance of that is that if you miss your deadlines on the general contractor’s bond, you may have rights under the subcontractor’s bonds which are considered common law bonds and are not governed by the same notice requirements that are in the statute. So, you may not need to send the first or second notice if you have rights under this subcontractor bond.

What other rights do you have?

Now, let’s assume that either you’ve missed all of the deadlines or something went wrong and you cannot make a claim against either the general contractor’s bond or subcontractor’s bond. Note of course that these rights exist in addition to the rights to file a lien or to make a bond claim. When we are asked to bring an action for a client that’s owed money, we usually bring an action on the bond or the lien if those exist. If not, we can also sue for breach of contract and unjust enrichment.

What is a breach of contract action?

In essence, it says that someone owes you money because they didn’t do what your agreement with them said they were supposed to do. That agreement does not need to be in writing – it’s better if it is, but it doesn’t have to be. A proposal, a quote, an invoice with terms, or any other writing that describes what the terms and conditions are will constitute an agreement. Even an oral agreement is still an agreement that you can sue on. Keep in mind (if you are a sub) that the major defense that most contractors use is the “pay when paid” defense. That means if they have not been paid by the owner, and they have a valid “pay when paid provision” in your contract, then even though you haven’t been paid, they may be able to defend your breach of contract action based on that pay when paid provision. Look for that early on.