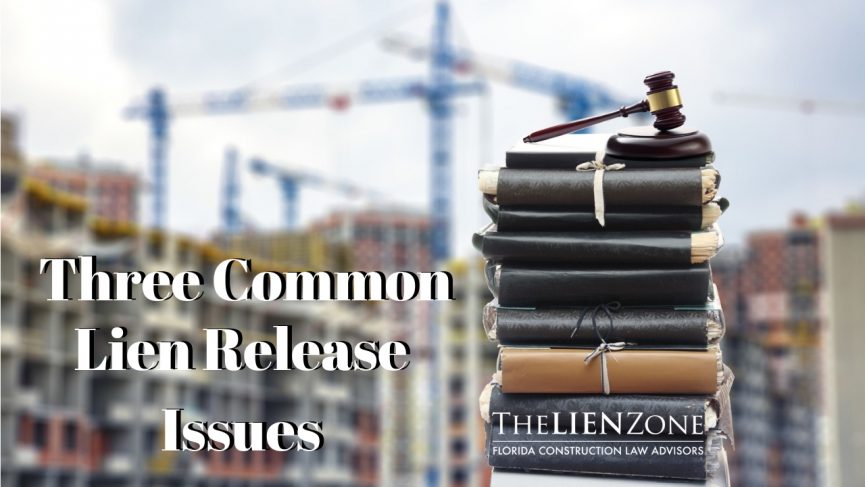 We have seen a lot of mistakes folks make when it comes to issuing lien releases. In this article, we are going to discuss the three most common lien release issues and how you should approach each.

What form of partial and final waiver should I use?

The first thing you need to be aware of is where you are in the pecking order of any particular construction project. If you are the general contractor, you are going to be looking for something  different than if you are one of the subcontractors. Generally speaking, you want to give a narrow release when you are receiving a check. When someone is handing you a check for a release, you only release the fewest number of rights possible and you preserve the greatest number of rights. The converse is true if you’re giving a check to somebody. You want them to release anything and everything under the sun, so you don’t have to worry about those things being an issue later in the course of the construction project.

The basic form of release

The basic form of release is the release that’s found in Florida Statutes chapter 713. It is a form of both partial lien release upon progress payment and final waiver upon final payment. It releases contractor or subcontractor lien rights through a certain day for partial releases and through the time specifically stated on final releases. The component parts of the partial release upon progress payment include the amount of money that you’re getting and the through date which is the date through which the release rights are effective. Note that this release form does not cover any retention or labor, services, or material furnished after the through date specified. The final lien release, however, has only one major part, and that is the amount of money you are receiving. The final release form doesn’t have a through date. The most important thing you need to know is that this release form only releases the contractor’s lien rights. It releases no other rights that the contractor may have against you or the property.

This release looks very different from the basic release form. This form is not found in the statute. The first thing you’ll notice in a custom form of release is that it has a lot more words. You need to read this type of release form carefully because you are giving up on a lot of other things, not just lien rights. The statutory release form only releases your lien rights. This form is releasing anything and everything that you may have as a possible claim. This include delays, change orders, any work done, and it’s all effective prior to and including the through dates. If you are a general contractor, this is the form of release that you should be getting from your subcontractors. With this, every time you give your subcontractors or suppliers a check effective through the through dates, all their rights go away. If you are a subcontractor and you’re receiving a check and having to give a release like this, you need to understand what rights you’re giving away. If you agree to a form of release in your contract, then that’s the form that you are bound to accept during the course of the project. So, if the general contractor or owner attaches a form of release to your contract, or they make a reference to the fact that you agree to use whatever release form they deem fit, you need to review it as you negotiate your contract. Negotiate the form of release just like you negotiate other components of the contract.

You need to condition your release upon payment of money. You can achieve this by issuing what’s called a conditional release whenever you’re giving a release without receiving a check. A conditional release is a release that is expressly conditioned upon payment. It is not effective until you receive the payment that’s recited in the document. A conditional release will say something like, “Notwithstanding anything to the contrary, this waiver and release is conditioned upon and not effective until the undersigned receives paid funds of XXXX.”  You are expected to put whatever amount you’re expecting to receive in the blank space. Statements like this makes the release expressly contingent on actually getting the money.

As a supplier, it is important you only provide releases that are contingent on actually receiving money. Let’s say as an electrical supply house, you provide an unconditional release to the electrician who gives it to the contractor, who gives it to the owner. But you never got your money. You only received an e-mail copy or fax copy of the check you were promised was coming. But that check never arrived. Your options to collect on the debt are severely limited because the release you issued is now effective to all the parties up the chain since they have no reason to know that you didn’t receive your money.

We have a client right now who’s a drywall contractor. He has a contract with a general contractor who has a contract with an owner. He was promised a check and based on his long-time relationship with this contractor, he gave an unconditional release based on the promise of a check which never arrived. We have now been forced to send a letter to the contractor and the owner saying “You have received the release but our client never received consideration for that release. Therefore, the release is void and unenforceable.” We are still waiting to hear back. But they have already funded the contractor based on our client’s release. We are going to be in a tough spot to suggest that the owner didn’t have the right to rely on that release. So, it’s absolutely critical that if you are giving a release without actually getting a check that you make it conditional.

Also, watch out for releases that are titled conditional but are not. Sometimes, we see releases that say conditional partial release and then when you read the document, they’re not conditioned. Conditional releases need to specifically spell out the condition – they’re effective once you receive the money you’re owed. The fact that the title says conditional means nothing if the body of the release does not actually contain conditional language.

Another thing you need to know about a conditional release is that it must correctly indicate the amount of money that you’re expecting to receive. Don’t just put in $10 as the condition. If you do and you receive $10, the condition is satisfied.

Using the wrong “Through Date” on your release

I’m not getting $10 neither am I giving them $10. So, why do I need to have a release that says $10? $10 releases are valid if you receive any type of consideration and sometimes even if you receive no money. For example, you’re a subcontractor on a job, and you have sent your notice to owner only because you’ve signed the contract, but you really haven’t done any work. Now that the owner and the contractor need a release from you, but you haven’t done anything or submitted any bills. In this case, issuing a $10 release at that point is perfectly fine. If you’re expecting a check, however, let’s say it’s $25,000, you must ensure your release says S25,000 and not $10. If you are a contractor and you are giving money and getting a release, you would always like it to say $10. The reason is that you don’t want any argument later. For instance, if the subcontractor comes to your office to pick up the check or you mail it to him or her, and they say “wait, you only sent me $20,000 it should have been $25,000.” If the release said $20,000 or $25,000, that’s the consideration that was given. And if they’re claiming more money, they may have a basis to say that you shorted the payment. However, if the release says $10, and you gave them $20,000, and they want $25,000. You can say “it doesn’t matter because I gave you consideration that you thought was adequate, I said $10 and I gave you a $20,000 check and the through date is the end of the month, we are done!”

If you are a general contractor, you would like to have all your releases to subcontractors and suppliers say $10. But If you are a sub, I would suggest that you scratch out $10 and put the actual amount that you’re expecting to receive on the check.

The only other time we see that a $10 release is acceptable is when a contractor does not want the owner to know what he or she is paying to the subcontractors. So maybe a contractor has a lump sum contract with an owner, and they don’t want the owner to be able to run through all of the releases, and add the amounts and realize that the contractor is charging so much more than he’s actually paying for the work. Some contractors may want all the releases given to them by the subcontractors and supplies to be $10 so that the owner is unable to add up all of the amounts associated with the project. The way to deal with that if you are a subcontractor is to issue two releases. You would give a release that has the correct amount on it and after you get that money, you will give the contractor a subsequent release, and it would say $10 for the same period.