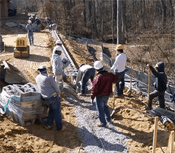 A contractor agreed to build a two story garage, but early in the project realized he had made a mistake.  He had constructed the foundation footer shorter than the length needed.  He advised the owners and proposed a resolution.  When the parties couldn’t agree on how to proceed, the owners asked for a final invoice.  Eventually the contractor filed a lien followed by a complaint for damages when he was only able to obtain half of the amount he had requested from the owners.

The owner’s primary defense was that the contractor’s lien was barred by his lack of substantial performance – after all, the contractor hadn’t finished his work.  This the contractor openly acknowledged but he argued that he was prevented from doing so by the owners and his failure to complete his work should be excused.   He was eventually proven right. The applicable law states that even when a contractor has failed to substantially complete a contract, he may enforce his lien rights if his performance has been excused or waived by the owner.  Otherwise, an owner could always prevent a contractor from enforcing his lien rights by simply terminating him before he had finished his work.  This contractor may have initially made a mistake but the owner’s actions were based on an incorrect interpretation of Florida lien law.