Is it a crime if a contractor stops working? 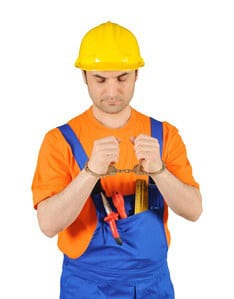 Is a contractor who accepts several checks to remodel a duplex guilty of a crime if he deposits the checks but doesn’t finish the work? Is it a crime if a contractor stops working?

A contractor who had been found guilty of theft appealed his conviction. He admitted to having cashed a number of checks he received for work he had yet to do on a contracted remodeling job, but he also showed that he did perform some work on the project. In fact, the contractor only stopped working when the owner had run into permitting problems and couldn’t decide whether to continue the remodel or just build a new structure. The evidence showed that at the time he accepted and cashed the checks, the contractor had no intent to defraud the owner by not performing contracted work.

No crime if contractor had no intent to defraud

Failure to perform a construction contract isn’t usually enough to have a defaulting contractor arrested or charged with a crime. Without showing a contractor’s specific intent to commit a theft or other offense, an unhappy customer must resolve his or her dispute in a civil, not a criminal, court.