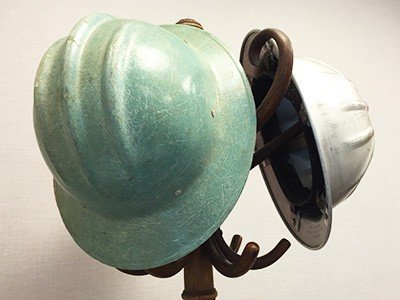 There may be a lot of things synonymous with construction, but few are as well recognized as the hard hat. And there’s good reason. Approximately 120,000 on the job head injuries occur each year, with over 1,000 of them being fatal. Head protection is obviously important.

But where did the hard hat come from?

It all started with the military steel helmet Ed Bullard brought back as a World War I souvenir. It inspired his family owned business, which had been manufacturing protective gear for over 100 years, to create and eventually patent in 1919 what came to be known as the “Hard Boiled Hat”. The expression “hard boiled” grew out of the manufacturing process where canvas was steamed, combined with resin and then layered several times, glued and varnished into a molded shape. Bullard also developed the suspension system one finds inside every hard hat. This allows for better absorption of any blow to the top of the hard hat.

First used by shipyard laborers and then bridge builders and construction workers, the hard hat design went from aluminum in the 1930’s, to fiberglass in the 1940’s, to plastic in the 1950’s. Today the hard hat is a lightweight and durable skull bucket worn by some 20 million American workers.

Go to Oshatraining.com to find the answers to the top 5 questions workers ask about hard hats, including whether it’s okay to wear a cap beneath their hard hat.