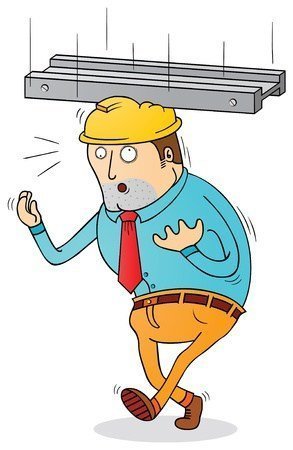 Remember that day in school when the lesson was about the acceleration of free falling objects. The science teacher asked an interesting question. If you dropped a feather and a hammer out the window at the same time, which would hit the ground first? According to Galileo, all things should fall at the same rate, regardless of their weight, right? That’s a valid theory and it was actually illustrated at the end of the Apollo 15 moon walk. In 1971 astronaut, David Scott, performed the experiment and had both items land simultaneously.

Of course, that was on the moon. Here on earth, where we have a distinct atmosphere, things are a bit different. Objects fall slower or faster depending on the amount of air resistance and drag they meet on the way down.

Not too long ago, many of us were surprised that a drywall delivery man could in fact be killed after being hit by a small tape measure. But that tape measure had fallen 50 stories.

Falling objects remain a big problem and significant safety concern on all construction sites. There were over 70 fatalities resulting from falling items in 2014. From small tools, nuts and bolts, hard hats, pieces of pipe, lumber, concrete bits, bricks, debris, even cell phones – all continue to fall from hi-rise job sites and many are causing extensive injuries and property damage.

Height, weight, shape – all matter in determining the extent of damage caused by a falling object. And it shouldn’t be assumed that only the area directly below the falling object is at risk. Items do not always fall in a straight line and often ricochet, hitting someone or something not even at the work site.

A safe job site has to be priority one for all involved in construction, and falling object protection has to be part of each contractor’s safety manual.