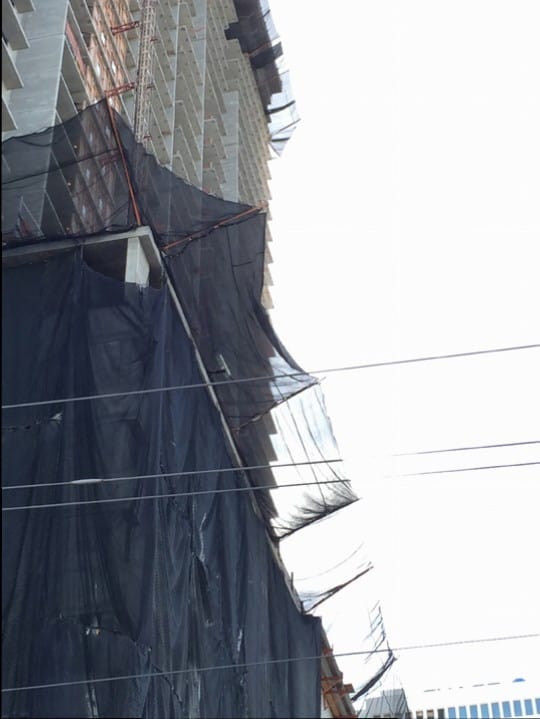 News flash – construction generates a lot of rubble, so much so that special precautions are regularly taken to safeguard workers, neighbors and passerbys from falling construction debris.

Construction workers realize the danger and protect themselves, wearing hard hats whenever they are at a job site.  They know that the risk of being struck by falling debris and suffering some form of injury is very high.  Some 10% of fatal construction injuries are attributable to falling objects.  One unfortunate drywall delivery man lost his life last year when he was struck on the head by a tape measure which fell from the top floor of a high rise project in Jersey City.  He had forgotten to put on his hard hat.

Neighboring businesses which happen to be located adjacent to an active construction site, however, must rely on the contractor’s adherence to a number of safety precautions.  Because they can do little to protect themselves, such neighbors depend on contractors to closely monitor the extent of foundation excavations, to erect protective safety netting where needed and to incorporate barricades, warning signs and other steps to safeguard both nearby persons and property.

The $1.05 billion, 5.4 million square foot Brickell City Centre project in Miami recently found itself the subject of a series of claims by a small neighboring art gallery and frame shop related to exactly these issues.  Having collected a box full of fallen debris, with chunks of concrete and an actual hammer, the shop sued, alleging that this massive construction enterprise was causing real damage to its business. From seeking an injunction to stop work until proper safeguards are put in place to also seeking compensatory damages because of alleged losses it claims to have suffered, the shop has mounted a David versus Goliath legal battle and has not let up its fight despite some initial adverse rulings.  This case has yet to make its way through the court to some sort of final adjudication, but it does serve as a clear warning to all those running an active job site.  Going the extra mile to safeguard workers and neighbors alike is something all construction managers must take seriously. In fact, the owner of this project has placed safety netting over the shop as well as plywood walkways surrounding the construction site.  There’ll be more to come on this story for sure.